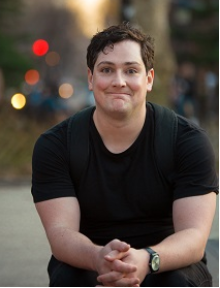 Since taking 4th place on "Last Comic Standing’s" 8th season, Joe Machi has been busy touring the United States as a headlining stand-up comedian. He has performed on "Late Night with Jimmy Fallon," and has become a regular on "Red Eye with Greg Gutfeld" on Fox News. Joe also won the 2013 NY Comedy Festival’s Funniest Comedian Competition and the 2010 NY Underground Comedy Festival's Emerging Comics Competition.

Comedian Joe Machi was born and raised in State College, PA, the home of Penn State University. After college he held jobs at a supermarket and media company. Machi moved to New York in 2006 to pursue comedy. He has been seen performing stand up on Late Night with Jimmy Fallon, The CBC’s Just For Laughs Gala and has been a panelist on The Fox News program, Red Eye. Machi was also one of 10 comics selected to perform at the 2012 Montreal Just For Laughs New Faces showcase. His comedy has also been mentioned in The New York Times, NY Daily News, NY Post and Time Out New York.

Machi has become a staple on New York Comedy Club and alt comedy shows as well as comedy festivals nation-wide.