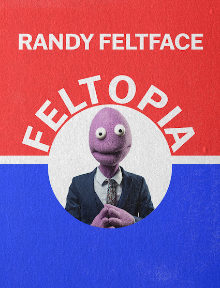 In these uncertain times, you need a voice you can trust. Someone who’s traveled the world and knows how to fix it. Courage. Integrity. Other stuff. Vote 1 Randy Feltface.

Randy Feltface has spent the past eighteen years carving out a unique niche on the international comedy circuit. He was nominated for best comedy at the Edinburgh Fringe Festival, played sold out seasons in London and New York and featured several times at the Montreal Just For Laughs Festival. He made his US television debut as crowd favourite on NBC’s Bring The Funny, and his comedy specials have become pirated YouTube sensations. Politics seems like the natural next step.

Randy Feltface has spent fifteen years carving out a unique niche on the international comedy circuit. He was nominated for best comedy at the Edinburgh Fringe Festival, played an eight week off-broadway season in New York City, featured several times at the Montreal Just For Laughs Festival and his special Randy Writes a Novel is a pirated Youtube sensation. He penned and starred in his own ABC scripted comedy Ricketts Lane alongside his skinny comedy husband Sammy J, a role that earned him an AACTA award nomination for best comedy performance. His occasional guest appearances on light-entertainment television programs in his native Australia have earned him much respect and an average income and he most recently infiltrated American television as a contestant on NBC’s Bring The Funny. His live show is a high energy existential crisis full of the kind of amusing anecdotes and biting observations that have earned him the title of World’s Most Entertaining Non-Human Comedian.