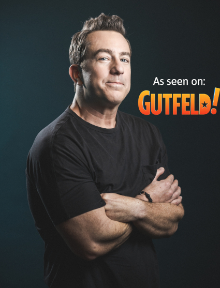 Actor and comedian Jamie Lissow is best known for his role in the current Netflix Original Series “Real Rob,” alongside SNL alum Rob Schneider, which Jamie co-wrote and co-produced. Jamie is a regular guest on "The Greg Gutfeld Show on Fox." Jamie has appeared on "The Tonight Show," "The Late Late Show," "Last Comic Standing," "Gotham Live," "Star Search," and his own half-hour Comedy Central special. Jamie lives in Fairbanks, Alaska with his wife and three beautiful children. Jamie recently wrapped his first movie that he wrote and produced with Rob Schneider, "Daddy Daughter Trip," where he appears alongside John Cleese, Rob Schneider, David Spade, and Jackie Sandler.

Jamie Lissow's first experience doing stand-up comedy was when he placed 5th in a comedy contest in Toronto, Canada. And there were only 3 contestants. He was hooked.


He began turning heads right away when he would yell very loudly in crowded places.

Jamie was then invited to do the Montreal Comedy Festival, in the sought after New Faces Category. At the time his face was only 25 years old so it was a perfect match. The set went well, and he has since been on The Tonight Show with Jay Leno, The Late Late Show, NBC's Late Friday, Last Comic Standing, Star Search and in his own 1/2 hour special on Comedy Central.

He has performed at hundreds of colleges and been nominated for Campus Performer of the Year by Campus Activities Magazine. Since then Jamie has been performing for sitting room only crowds all across the country.

Jamie has been heard on XM/Sirrius Radio, Pandora, Opie and Anthony, The Bob and Tom Show and has appeared on Fox News Redeye over 50 times while still managing to have no political opinions.

He recently finished writing and will be starring in a television show with SNL alum Rob Schneider and is living in Austin, TX with his wife and two beautiful children (unfortunately he has 3 children.)