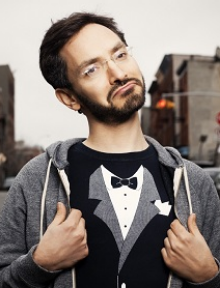 Myq Kaplan is a comedian named Mike Kaplan. He has been seen on the "Tonight Show," "Conan," "The Late Show with David Letterman," "Late Night with Seth Meyers," in his own half-hour Comedy Central Presents special, and in his own one-hour special on Amazon, "Small, Dork, and Handsome." He has been a finalist on "Last Comic Standing" and has appeared on "America’s Got Talent." His album, “Vegan Mind Meld,” was one of iTunes’ top 10 comedy albums of the year, and his newest album, "A.K.A.," debuted at #1. "The New York Times" called it "invigoratingly funny" and included it among its five "coronavirus best new comedy specials"..."to remind you of the old normal." And here we are in the new weird! Enjoy

Myq Kaplan is a comedian named Myq Kaplan (pronounced "Mike"). He is a 2010 Last Comic Standing Finalist and has appeared on the Tonight Show with Conan O'Brien, the Late Show with David Letterman, Comedy Central Presents, and all the other places he's been. You can listen to Myq's podcast, Hang Out With Me, on the Keith and The Girl network, His debut CD, Vegan Mind Meld, was one of iTunes' top ten best-selling comedy albums in 2010, followed by Meat Robot in 2013 and his one-hour Netflix special Small Dork and Handsome in 2014.

The Comedians magazine calls him "a comedy machine, in the best possible way. The way that some machine vend soda or prevent other machines from killing future revolutionaries, that's how Myq Kaplan does comedy: relentlessly, methodically, unblinkingly."