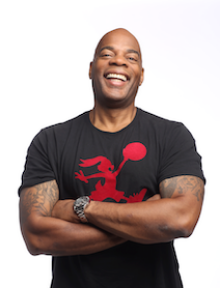 Before working in show business, Alonzo Bodden was a jet mechanic for Lockheed Martin. His passion and talent for comedy pushed him to the stage. Bodden's credits include winning Season 3 of NBC's "Last Comic Standing," performing on "Comics Unleashed" and having his own "Comedy Central Presents" special. He has appeared on "Californication," as well as "The Adam Carolla Podcast."

DINE AT GABRIEL'S BEFOREHAND
With your dinner package you will receive an upgrade to preferred seating in the showroom. Show tickets must be purchased prior to making a dinner reservation. Dinner reservation can me made through the following link.

MORE FUN WHEN YOU STAY OVER
As a courtesy to our customers, Bananas Comedy Club guests will always receive the most up-to-date competitive rates the Holiday Inn has to offer. Rates can be accessed through the following link.

This event is 16 and over. Any ticket holder unable to present valid identification indicating that they are at least 16 years of age will not be admitted to this event, and will not be eligible for a refund.

Please note, there is a 1 item per person minimum in the showroom.

Tickets will be available for pick up at the box office prior to the show.

Even before appearing on NBC'S 'Last Comic Standing', Alonzo Bodden knew there was nothing, absolutely nothing that would ever make him give up comedy. "That's the drug", he says "when they laugh it's like I'm a jazz musician and they hear it, and they get it. It's power to take the crowd wherever I want them to go. I love it when they laugh, especially when they relate through laughter. It's a beautiful thing. It also means I'm going to get paid, which is nice."

Bodden didn't always make his living as a stand up comic. A graduate of Aviation High School, for 9 years he earned a paycheck as a jet mechanic for Lockheed and McDonnell Douglas. While comics around the country were making audiences laugh at airline jokes, Bodden was working on the top secret Stealth Bomber. It was during a stint as trainer that Alonzo discovered his ability to entertain a group of people. I was teaching airplane mechanics when I realized it was more fun to make them laugh, Bodden explains, I was laid off one more time and I never looked back, although it was nice to have a steady paycheck and benefits. He enrolled in a comedy class and the rest as they say, is comedy history.

Alonzo has always appreciated the benefits of doing stand up comedy, one of which is having fun on stage. He recalls one of his favorite experiences, I was working at the Brea Improv and in the middle of my set, a guy had a seizure. After the paramedics carted him off, I went up there, did 10 killer minutes on seizures and then got back to my set and the show kept rolling. It was great.

Bodden has ventured off the stage to have fun with his many roles on television and in film. He was the security guard, bouncer, crook, and/or a cop in 'Bringin Down the House', 'The Girl Next Door', 'Angel', and 'Grounded For Life', to name a few. Alonzo won the Season 3 grand prize on NBC's 'Last Comic Standing' after placing as runner-up on Season 2.

Alonzo describes his material as cynically good natured in an angry suburban Negro kind of way. While he strongly believes that all young comics should study Bill Cosby, he freely admits that his mom is the funniest person he knows. When his family and friends attend his shows he loves and appreciates it.

One of the great things about Bodden's career is that he can make you laugh and fix your Learjet. One day Alonzo hopes to have his own Learjet.